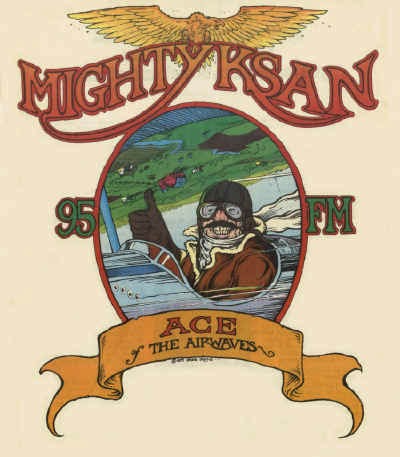 For two days in early June, parts of the San Francisco Bay Area rocked again to the sounds and voices of what was once the premier underground FM radio station on the West Coast - KSAN Jive 95.  On June 4th at Yoshi's Nightspot in San Francisco and June 5th at Spenger's Restaurant in Berkeley, former KSAN DJs and staff, radio luminaries, and musicians in the rock scene gathered to induct KSAN into the Bay Area Radio Hall Of Fame's Legendary status. A celebration, a luncheon, a walk down memory lane with friends, new and lifelong, sharing their stories and the magical existence of this only-in-San Francisco "Legendary" radio station. And as we found out, it was a lot more than just a radio station.

The voices still linger in my head... Big Daddy Tom Donahue, Dusty Street, Richard Gossett, Norman Davis, Terry McGovern, Ben Fong Torres, and Bonnie Simmons....now the stuff of radio legends, and all who were in attendance at these events, with the notable exception of Big Daddy, who went to that station in the sky some years ago.  But these and others associated with the station and the rock scene at the time, and still today as we saw at Yoshis, were all on hand to meet fans, listen to the music, and at Spengers, hold an interesting panel discussion led by Rolling Stone's Ben Fong Torres.  Even with the rich history of radio "personalities" in the Bay Area, as evidenced by the more than the 140 announcers already inducted into the Radio Hall of Fame, these folks represented the changing times, the opening up of the culture and society, and the mood of the young folks in the Bay Area during the late 1960' and 70's. No one there worked in a vacuum, they were all part of the scene. It created awareness of the music, venues, politics, and the culture that were popular with young folks, who up to that time had no real voice in society.

I too, was a KSAN listener, and some of the very DJs I grew up with on KYA or KFRC AM indeed made the switch to the FM side of the dial, and we expanded their radio consciousness along with them. It was a great ride as it was apparent in the opening night show Yoshi's, it was a mini Fillmore or Avalon experience, sans the light show. The bands and musicians, some new, some "original", all sounded great. They included Sal Valentino with Annie Sampson, Big Brother and the Holding Company, Country Joe McDonald, who told the story of a certain cheer, Cold Blood with Lydia Pense with Tower of Power's former vocal king from the way bay - Rick Stevens, who still IS a young man, well at least in spirit as he wooed the crowd with his wonderful voice. Dan Hicks without the Lickettes and the Imperial Messenger Service (former Quicksilver Messenger) all who played their hearts out to an audience filled with those same announcers who featured their music on the radio daily in the 60's and 70's. Each act seem to get stronger, as the memories of their music took hold and we were ALL young again.

The intention of this story was not to review the music but to acknowledge the event as a whole, and the greatness of KSAN Jive 95, a truly legendary radio station, so in that light I'll just say no one was disappointed, and the musicians were having a ball. Former members of KSANs on-air personality staff would introduce the acts, which for some in the audience would be the very first time actually seeing any of them. Having this opportunity to put a face to a voice after so many years was a delight for many in the crowd.

The Yoshi's event was smoothly produced and presented by master PR guys Kenny Wardell and Steve Cushman, and it certainly is important to include a few of evenings highlights presented by these two. One of the elements that made K-S-A-N, KSAN, was "newsman" Skoop Nisker, who blended topical music with new news into living matras of current events... his poem to the Unknown Hippy was rousing and sounded like one of his on-air commentaries.  Dan Hicks, who had provided some of KSAN's original station breaks and musical IDs, was on had to do two fun songs, sounding great even with out Daria and Roberta, his current Lickettes.  Cold Blood's short set with Rick Stevens brought the East Bay funk of Tower of Power into the HOUSE and Lydia was on it as well, and the Messenger Service was as loud and metallic as ever.  Hearing songs like "Have Another Hit" and "Show me the Way" really took me back to my dance hall days....both David Freiberg and Linda Imperial sounded strong and full of life.  And finally, Country Joe's story behind the "Feel Like Fixin' To Die Rag's"  F--- cheer was priceless.

The next day saw KSANs actual induction into the Bay Are Radio Hall of Fame by the California Historical Radio Society at a lunch at Spenger's in Berkeley.  Bonnie Simmons, long time program director and still active in the radio scene at KPFA, accepted the award for the other members of the station and in the memory of founding program director and mentor Tom Donahue.  The panel included Bonnie, Scoop Nisker, with a sore voice from the previous night's terrific reading of his beat poem, Richard Gossett, Norman Davis, who I'd heard as a mere child when he was on AM radio,  the always fun Terry McGovern, and the wonderful Dusty Street, who went from engineer at KMPX to the queen of  KSAN.  Ben Fong Torres acted as the nimble moderator and covered all the bases.  Hearing their personal histories and back stories was fascinating, as well as their understanding of the importance of KSANs influence on the music of the Bay Area and nationally as well. As Richard Gossett said," we were so lucky to be at the  right place at the right time,  war babies tired of top 40 radio and able to fit into what was going on. And it could have only happened in San Francisco."  Amen to that brother.

On a personal note, seeing some old friends from radio and even one  of my college professors was a real joy, and many folks had similar encounters with lost friends and associates. Several of the KSAN DJs hadn't seen each other in years, so I'm thankful for the California Historical Radio Society for putting on this event and giving everyone involved a great reason to get together once more.  KSAN will live on, now recognized as a rightful member of the Legends of Bay Area radio.
Posted by Event City Online Service at 3:10 PM